Here’s a cool salad for a sizzling summer! It’s as hot as Hades here in the Sacramento Valley: Yesterday it was 108 degrees. Today it’s 102. Yikes! But no matter where you are, you’ll love this refreshing salad that’s super easy to make, especially when it’s hot and you don’t feel like cooking.

When we think of Mexican salads, we tend to think of traditional dishes such as tostadas, taco salads, and pico de gallo. But the main purpose of this blog is to publish Latin recipes that are off the beaten path. This recipe is from Saveur, the culinary magazine that is an excellent source of contemporary, cutting edge Latin recipes.

I suppose it’s human nature to cling to what’s safe and familiar. But you might miss out on things you might enjoy! My stepmother was from Zacatecas, Mexico, and so my dad got more than the average person’s exposure to Mexican cuisine. We lived in L.A. and one night we were at Barragan’s, one of our favorite Mexican restaurants. I ordered one of the usual suspects – a tostada, taco or something. Mexican food is more than that, my dad said, try something different, like arroz con pollo (chicken with rice). I did. It was terrific. So try this mango salad! It could become one of your go-to summer recipes.

Peel mangos and cut fruit into cubes. Arrange on a platter and drizzle with lime juice, coconut, cilantro and chile powder. Serve.

Coconut eggnog is a terrific way to give holiday entertaining a Latin twist. This Puerto Rican drink is derived from Steven Raichlen’s book Healthy Latin Cooking, a good source of Latin recipes that are off the beaten track and often not found in restaurants.

Healthy Latin Cooking mentions that coconut eggnog or coquito, is traditionally served in small glasses. The recipe involves draining 4 coconuts of coconut water, then cutting them in half with a cleaver and serving the eggnog in the shells. If you’re enterprising, go for it! But to save time, my recipe uses canned or boxed coconut water, which is readily available in stores.

I also use 1/2 cup, rather than a cup of rum. This allows the flavors of the coconut, condensed milk and spices to stand out more. Drink safely, and thanks for visiting my blog! 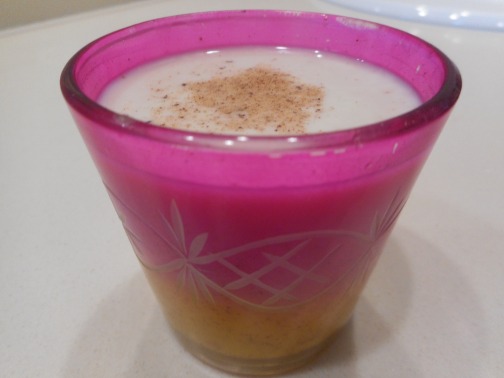 Tip: If you need cinnamon and nutmeg, you don’t have to buy a whole container. Natural foods stores and some markets have spices in bulk, so you can get only as much as you need at a time. Spices cost pennies this way. There are also no past-their-prime containers of spices taking up space in the cabinet. Spices lose their potency if they’ve been sitting around on a shelf too long. Fresh spices mean a better-tasting dish.

Open the can of coconut milk. You will see that the coconut fat has solidified. Scoop out the can, place the contents in a microwave-safe bowl, and zap it for about thirty or forty seconds. Stir to make sure all the fat is dissolved, then start making the eggnog.

In a large saucepan on medium heat, combine coconut water, nutmeg, cinnamon, coconut milk, sweetened condensed milk, rum and beaten egg. Cook, stirring frequently, for about 3 minutes, and then remove from heat. Do not let the eggnog come to a simmer or boil at any point, otherwise the proteins in the egg will coagulate, and then there will be scrambled egg in the mixture.

I recommend adding the coconut water first, then stirring in the nutmeg and cinnamon, then adding the other ingredients. Otherwise, the spices may form little clumps, which you’ll have to work to get out.

Let the eggnog cool to room temperature, then refrigerate, covered, for at least 3 to 4 hours or overnight. Because the cinnamon and nutmeg may sink to the bottom while chilling, stir before serving. Serve chilled in a small glass or cup with a sprinkle of nutmeg on top.